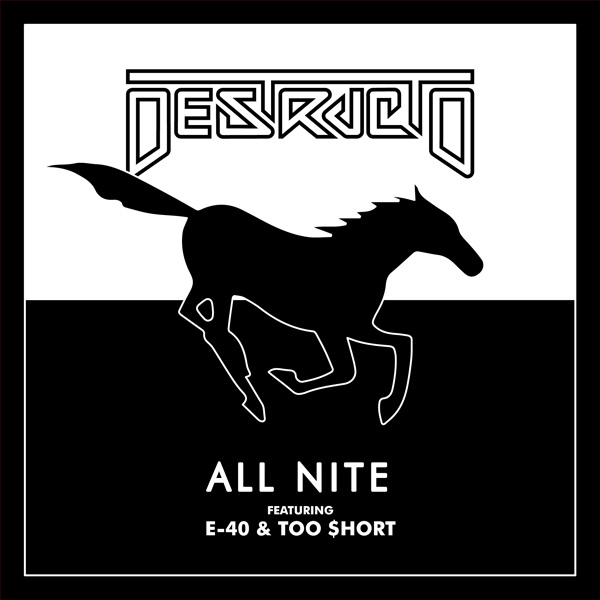 Renegades break the mold, challenge the status quo, change the game, and set the pace for everyone else to follow. DESTRUCTO’s 2017 EP RENEGADE due out March 31 (Hits HARD), lives up to that promise, throwing the ultimate late night party fueled by a haze of house, hip-hop and funk. A precision-guided producer in the realm of g-house (where rap melds with house music), DESTRUCTO turns up with not one but two West Coast icons for the EP’s first 2017 single out today (January 27) with the timeless nocturnal banger “All Nite” featuring E-40 & Too $hort).

“We recorded that up at E-40s house in the Bay,” DESTRUCTO recalls of the track co-written with Wax Motif and Styalz Fuego. “The dude is such a genius. He just looked at his phone and said, ‘I was in the shower and wrote this down. It became the hook for ‘All Night.’ He even drops this classic Oakland term ‘Manie’ which means “We go crazy.” It fit the song.”

Listen to “All Nite” now at: http://smarturl.it/allnitedestructo

Elsewhere on RENEGADE, “Hard 4 The Nite” serves as DESTRUCTO’s signature sonic call-to-arms. With a powerhouse guest list that spans the legendary Snoop Dogg, zeitgeist dominant multiplatinum chart-toppers Kevin Gates and Yo Gotti, and rising stars Denzel Curry and Tink, the track merges hyper-charged verses with a hypnotic hook from Gates. Following their collaboration “Dare You 2 Move,” which ratcheted over three million Spotify streams, he re-teams with Los Angeles spitter Problem for the bombastic and booming “Winning.” Meanwhile, Freddie Gibbs lights up the title track with a gruff, gritty, and guttural flow.